The End of the “Inflation-War”

The “Inflation-War” between two groups of Cosmologists (and Physicists) was officially announced on May 9, 2017, see https://blogs.scientificamerican.com/observations/a-cosmic-controversy/ .

Issue: Group one accuses the “Inflation-Cosmology” is not science. Group two is the defender.

As {what is science?} is different for the two groups, this War is about the {Chicken argues with ducks}; talking to oneself, not to each other.

Thus, I have made a {Quality Control gauge (go/no-go) for physics theory} 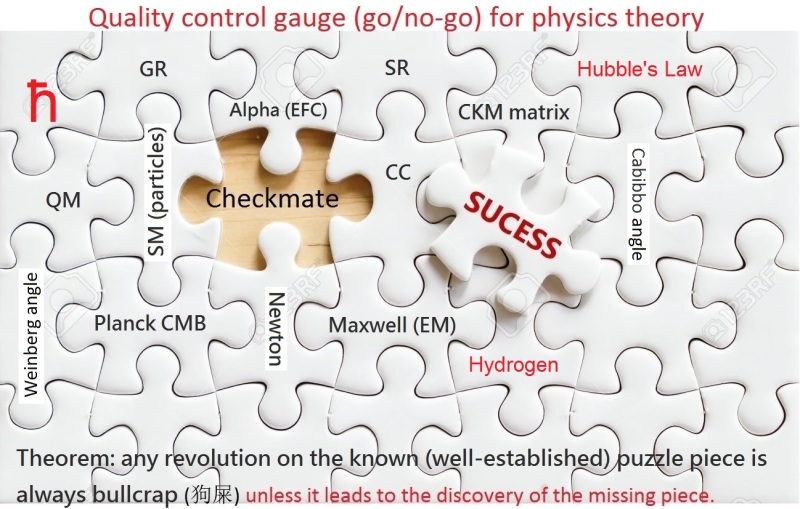 This is a puzzle-test-gauge, and it has the following attributes.

One, all pieces (except one missing piece) are known.

Two, these known pieces can be categorized in two ways.

Three, the missing piece is the gauge for the {theory in question}.

There are three steps (or rules) for the gauging.

R2, if it cannot RELATE to ALL KNOWN pieces, it is not the right piece.

R3, if there is no fitting piece after trying ALL (infinite numbers of) possible pieces, the {theory in question} can be the {only game in town}.

Now, is any known piece above the direct consequence of {Inflation} by precise derivation? The answer is a big NO. That is, the {Inflation} is not even part of this puzzle. Science or not, {Inflation} is simply not PHYSICS.

Of course, there is a rescue in accordance to the R3. If no theory in an infinite possibility (such as in the case of multiverse), then {Inflation} can be the {only game in town}.

On the other hand, if we can find one theory which meets all three rules, then {Inflation} is dead.

With R1, we must show that one model is able to DERIVE at least SOME known pieces (if not ALL).

I will start with the issue of {how does THIS universe expanding with acceleration?} See graph below. 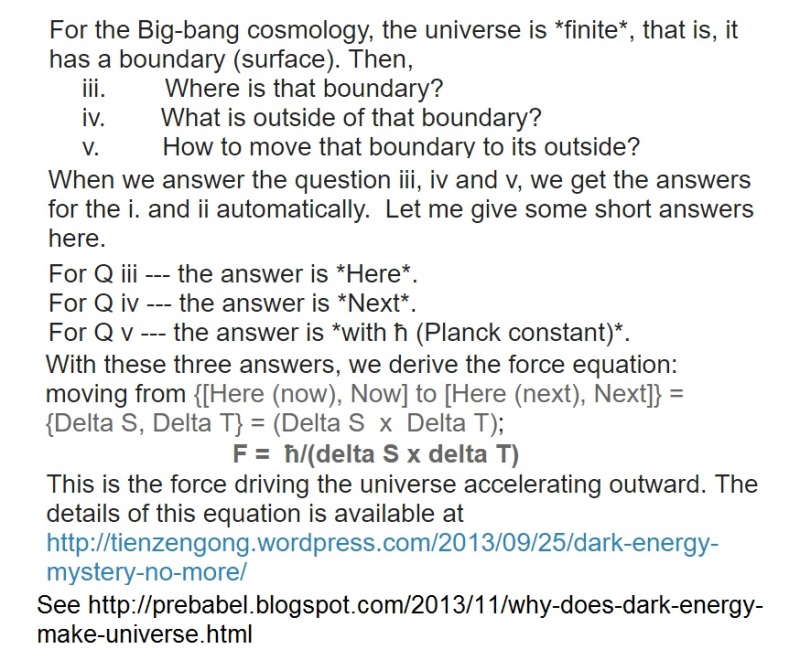 With this universe expanding force, it DERIVES the quantum-principle (QM).

In this model, ħ is the fundamental ACTION unit, and bookkeeping is done with a simple ratio {ħ/ (total quantum action counts)}. This ratio has been precisely measured as CC. This CC is the bookkeeping for this COSMO.

If the ħ is the fundamental ACTION unit, it should be the building block for all known matter too. That is, we should be able to DERIVE the value of ħ from the structure of the simplest atom (hydrogen). Indeed, we can, see graph below. 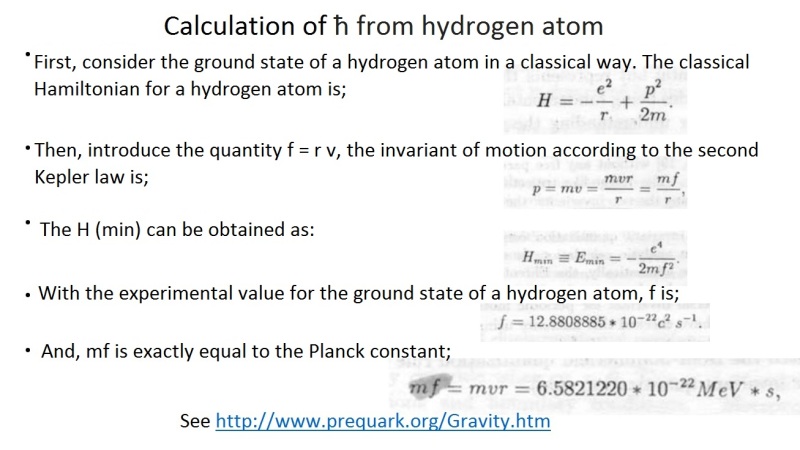 Now, I have showed one model which not only is deriving some (not just one) known puzzle-pieces but encompasses the entire scope (from quantum particles to Cosmo). That is, R1 has been met.

I told Alan Guth that {Inflation} is nonsense with very polite words in 1993. I am very happy that three more cosmologists now agree with me, 24 years after my comment. I am 100% certain that the {Inflation} will still be nonsense zillions years from now. 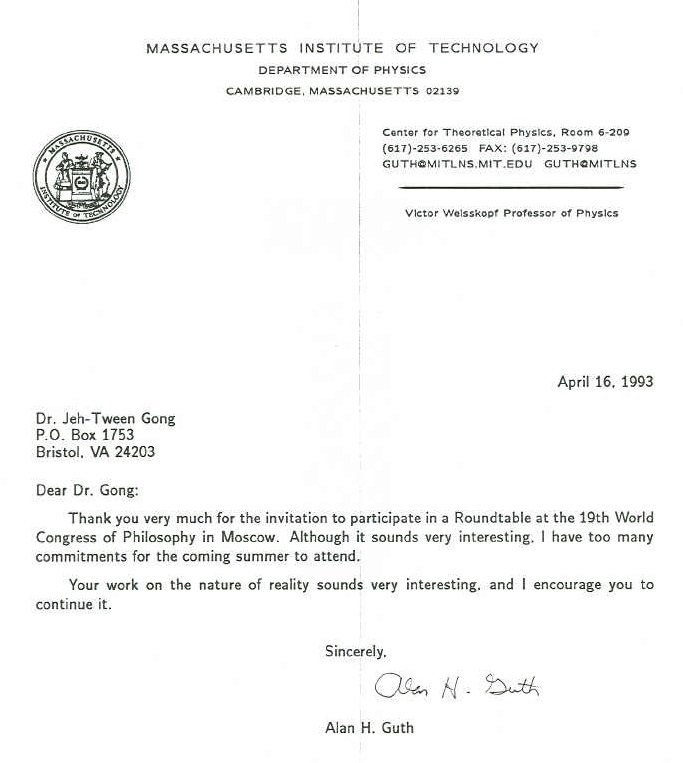 In addition to this ‘quality control gauge’, we can examine this issue with traditional science methodology (theory-prediction-verification interplay).

In the G-theory’s derivation (calculation) of the Planck CMB data, it predicted a 9% DARK FLOW. 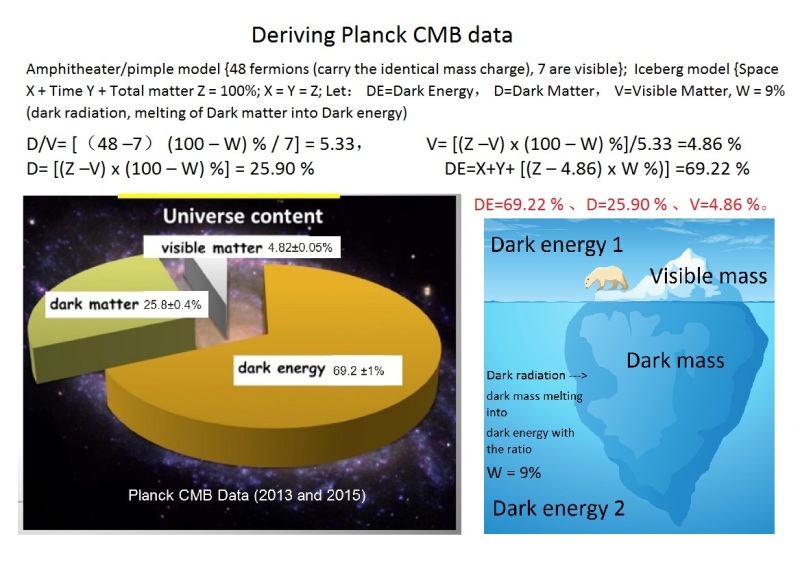 This prediction was verified a few weeks ago. Adam Riess (Nobel Laureate) announced on May 11, 2017 that the local measurement of Hubble constant is about 9% higher than the Planck CMB calculation (at the Harvard-Smithsonian Centre Center), see https://tienzengong.wordpress.com/2017/05/15/comment-on-adam-riess-talk/ . Also see Freedman’s plot below. 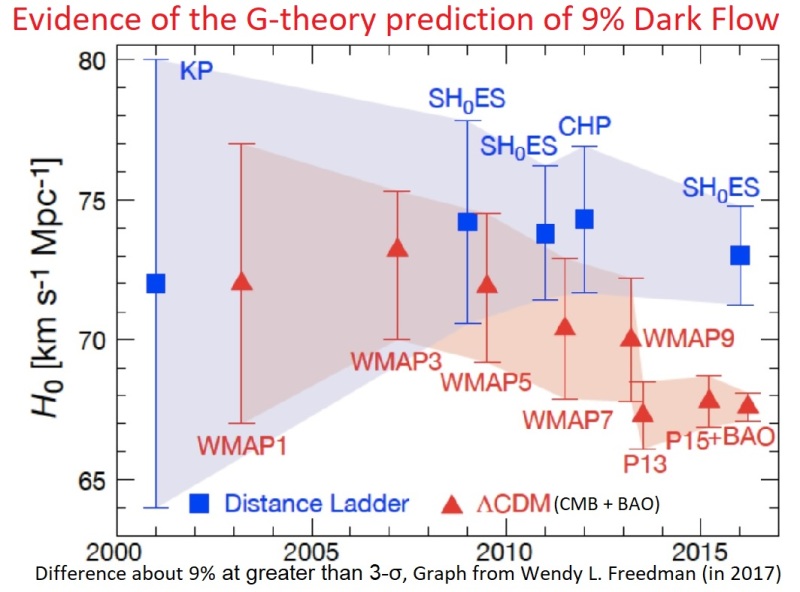 In addition to passing the “quality control gauge” and ‘prediction/verification’ criterion, it needs to pass the Occam’s razor too; that is, better than the other cyclic-multiverse (CM) models.

For a correct cosmology, it basically must encompass 5 stages.

Five, the END (fate) of this universe. 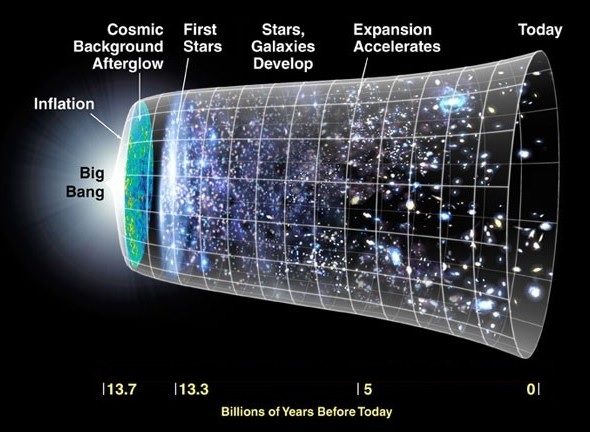 ‘one’ is described as ‘inflation’ or other CM models.

‘two’ and ‘three’ are the results of GR (General Relativity) and SM (Standard Model of particle physics).

‘four’ is a fact but the mechanism is unknown (the dark energy).

‘five’ is described with Ω. 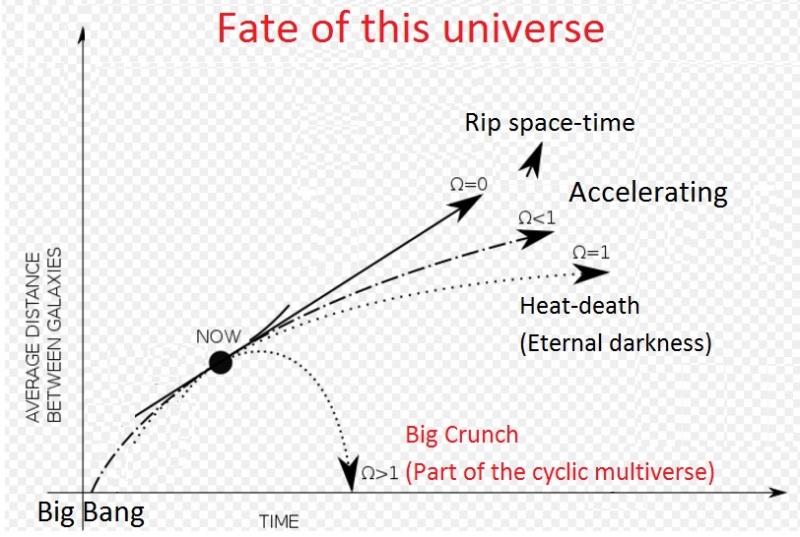 On the other hand, in G-theory:

‘one’ (exponential expansion) is the result of ‘cyclic bounces’. 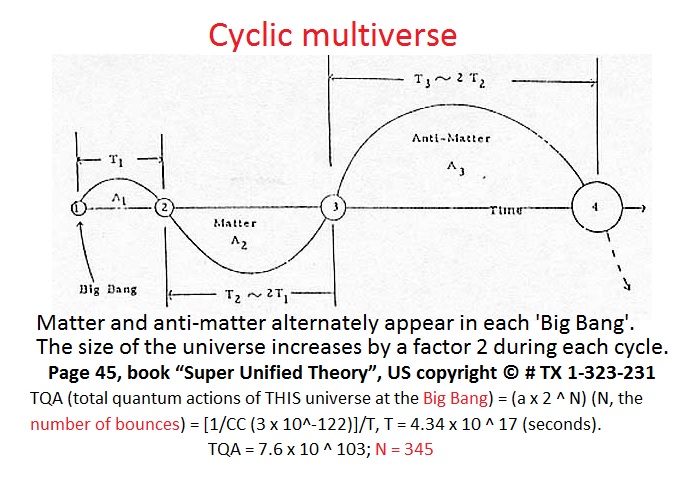 ‘two’, ‘three’ and ‘four’ are controlled by the Dark Flow (W, between dark mass and dark energy). 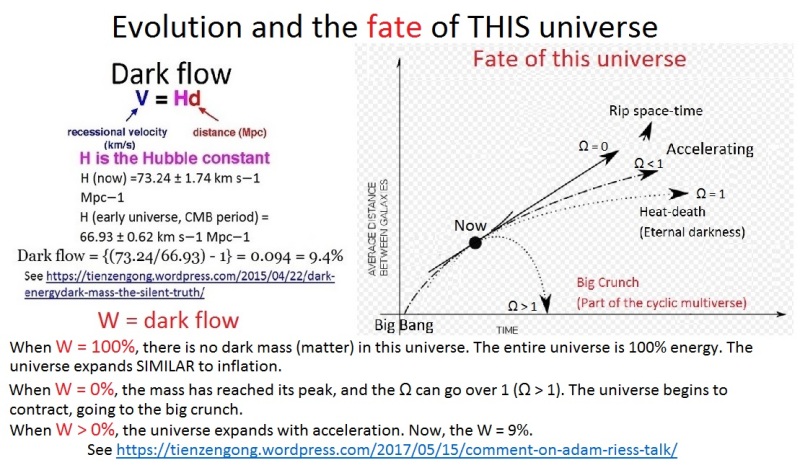 When W = 0, no more mass leakage, and the Ω will slowly go to 1, ready for another bounce.

Currently, the W = 9% is the PREDICTION of G-theory, and it is now confirmed with the measurements (CMB and local) of Hubble constant.

For mainstream, the ‘End’ is an unknown for ‘inflation’. For CM, it (the END) is of course clearly defined as a ‘bounce’.

For all other CM models, they do not have a mechanism to change the Ω from the current value of (< 1, smaller than 1) to the required value of (> 1, larger than 1).

Furthermore, the ‘inflation’ and all other CM models are not about creation but began with something very small (definitely not nothing).

Now, we can make clear comparisons between G-theory and all the other models (inflation and all other CMs).

On the other hand, G-theory is a creation process. It starts with the equation-zero, from nothing creates (real time and ghost time). In real time, matter (positive energy) are created while the ghost time houses its (matter’s) ghost, the gravity (negative energy). The FIRST universe had only one particle (such as up-quark), and the lifetime of that universe is the same length as the life time of a virtue up-quark. About at the 10th universe, a (just one) proton was created. Then, the anti-protons for the next universe. It will take about N= 345 to reach the PRE-this-big bang state. 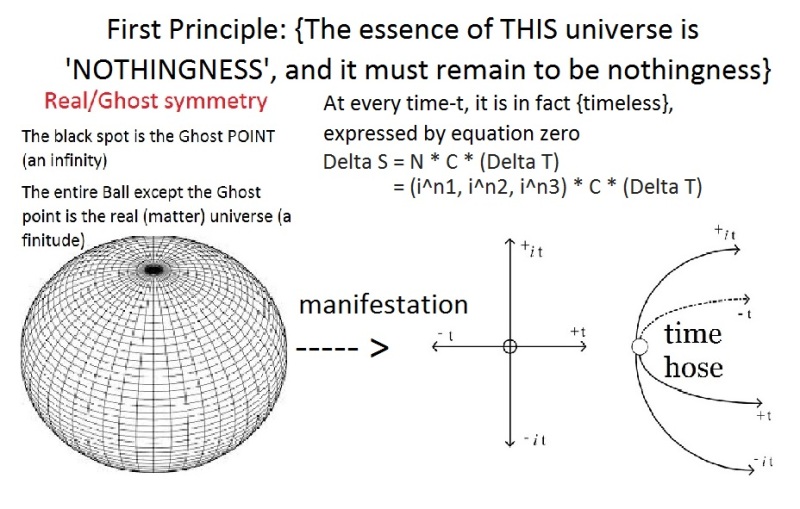 Two, ‘inflation’ is a process AFTER (or at the same time) the big bang.

On the other hand, CM expansion is definitely BEFORE this big bang.

Three, ‘inflation’ does not lead to a definite END for this universe.

On the other hand, CM is controlled by the W-dynamics.

First, equation-zero shows that ¼ of time-energy goes into space while ¾ goes into matter. If no flow between the two, two times more matter are created than space.

But, there is interaction (flow) between the two.

At the beginning of the big bang, W = 100%, all energy, no matter. All matter are converted into energy/space.

After the opaque stage, matter became to form but still with a positive dark flow (+W); that is, the space is boosted by this +W (9% now) in addition to its rightful share (1/4 of time energy). So space expands with acceleration in addition to its normal expansion. During this period, the Ω is smaller than 1.

When W = 0, that acceleration of space expansion stops. At this point, the Ω will slowly reach the value of 1. As matter/energy ratio is 3 to 1 with equation zero, gravity will slowly change W from positive to negative (-W); that is, converting space into matter. In this period, the Ω will slowly go over 1. And, it leads to a new BOUNCE.

Note, added on September 28, 2017 (over 4 months after this post): Sabine (a theoretical physicist specialized in quantum gravity and high energy physics) wrote an article {Is The Inflationary Universe A Scientific Theory? Not Anymore, see https://www.forbes.com/sites/startswithabang/2017/09/28/is-the-inflationary-universe-a-scientific-theory-not-anymore/#2d04f93eb45e }.

11 thoughts on “The End of the “Inflation-War””